The Dissidents: A Memoir of Working with the Resistance in Russia, 1960-1990 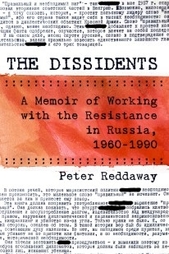 The Dissidents: A Memoir of Working with the Resistance in Russia, 1960-1990, by Peter Reddaway, was published in February 2020 by Brookings Institute Press.
In the last decades before the Soviet Union collapsed in 1991, dissidents within the country worked to expose the tyranny and weakness of the Soviet state. Reddaway spent decades studying the Soviet Union and came to know these dissidents and their work, publicizing their writings in the West and helping some of them to escape the Soviet Union and settle abroad. In this memoir he tells their stories and also captures the human costs of the repression that marked the Soviet state: the forced labor camps, the internal exile, the censorship, the use and abuse of psychiatry to label those who found fault with the Soviet system mentally ill. Reddaway’s book also places the work of the dissidents within the context of the secretive politics inside the Kremlin, where a tiny elite competed for power—even as the Soviet system was crumbling around them.

2020-09-07
Previous Post: Decline of Soviet Union and Russia: Europe or Asia?
Next Post: The Human Factor: Gorbachev, Reagan, and Thatcher, and the End of the Cold War