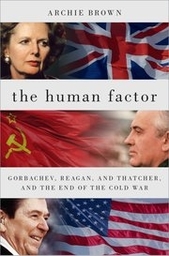 Archie Brown authored The Human Factor: Gorbachev, Reagan, and Thatcher, and the End of the Cold War (Oxford University Press, April 2020.) In this analysis of the role of political leadership in the Cold War’s ending, Brown shows why the popular view that Western economic and military strength left the Soviet Union with no alternative but to admit defeat is wrong. To understand the significance of the parts played by Mikhail Gorbachev, Ronald Reagan and Margaret Thatcher in East-West relations in the second half of the 1980s, Brown addresses several specific questions: What were the values and assumptions of these leaders, and how did their perceptions END_OF_DOCUMENT_TOKEN_TO_BE_REPLACED 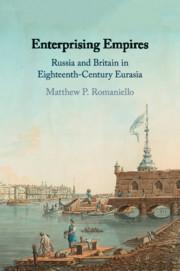 Enterprising Empires: Russia and Britain in Eighteenth-Century Eurasia, by Matthew P. Romaniello, was published by Cambridge University Press in February 2019. Commercial competition between Britain and Russia became entangled during the eighteenth century in Iran, the Middle East, and China, and disputes emerged over control of the North Pacific. Focusing on the British Russia Company, Romaniello charts the ways in which the company navigated these commercial and diplomatic frontiers. He reveals how geopolitical developments affected trade far more than commercial regulations, while also challenging depictions of this period as a straightforward era of Russian economic decline. END_OF_DOCUMENT_TOKEN_TO_BE_REPLACED